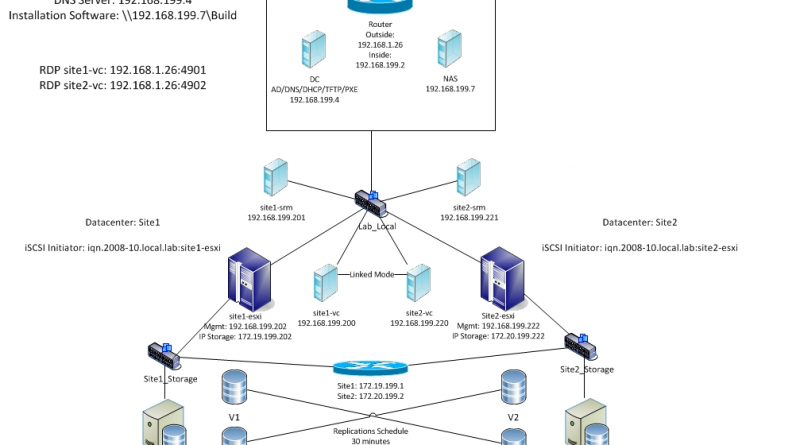 Needed to brush up a bit on SRM for a couple of projects I am working on so I set up an environment in my home lab to practice up on the installation, configuration, and testing of SRM.

Here is my lab design diagram that helps me keep things organized.

Each “site” consist of an ESXi server, vCenter Server, SRM Server, and a LeftHand VSA. The “sites” share the domain controller built using AutoLab scripts. I manually added the DNS entries for the site servers.

I am using the shell VMs from AutoLab for the ESXi, vCenter, and SRM servers, the SRM server uses the vCenter shell VM, but not the automated build scripts. The free SCO router from AutoLab is used for access into the environment. I set up port forwarding rules to forward 4901 to RDP(3389) on site1-vc and 4902 to RDP on site2-vc. A pfsense firewall is being used to simulate the WAN connectivity between the two VSAs.

vSphere 5.0 is installed on the ESXi servers and the network connectivity is configured. For this lab I kept the network configuration fairly simple. I have a VM network on the same vSwitch as the management network and a separate vSwitch with a VMkernel port connected to the storage network for the software iSCSI adapter.

The vCenter servers are also 5.0 and installed in Linked Mode so that each one (including SRM) can be managed from either “site”.

The trickiest piece of the set up was getting the LeftHand VSAs configured for iSCSI access from the hosts and then remote replication. This article helped me with the setup and getting the volumes replicating between the two VSAs – http://www.virtuallifestyle.nl/2008/11/vmware-site-recovery-manager-with-lefthand-vsa/. The article is from a few years ago but the process is basically the same.

Setting up access to the volumes is a little different as I could not find the “Access Volume” wizard. Instead you have to add the ESXi host to the “Servers” tree of the cluster. You will need the vmk IP address that will be accessing the volume and the iqn of the software iSCSI initiator.

Once the server is added read/write access to the volume the server will be accessing needs to be assigned.

The rest of the set up is pretty much as it is here http://www.virtuallifestyle.nl/2008/11/vmware-site-recovery-manager-with-lefthand-vsa/. Once completed there is a single volume on each VSA presented to each host. A schedule is set up to remote replicate the volume to the volume on the “remote” VSA every 30 minutes.

SRM Server 5.0.2 is installed on each of the “site” SRM servers. I am using SQL 2008 Express R2 installed locally on the SRM servers as the database for SRM. This is not supported and the SRM database has to be created and setup before SRM 5.0.2 will install. Instructions to set up the SQL 2008 Express R2 for SRM can be found here http://www.sysadmintutorials.com/tutorials/vmware-vsphere-5-x/site-recovery-manager-5/part-1-vmware-srm-5-database-setup/

Now the environment is ready for SRM to be configured and tested, but that is another post…