If you are looking for something to do in your vSphere home lab this is a neat little project: Weathervane Open Source Benchmarking Tool. Standing up Weathervane in the home lab will provide hands-on for developing skills including creating a template VM, creating a guest customization specification, working with some basic Linux commands, working with an app with multiple tiers, cloning VMs, and monitoring performance metrics.

The architecture of Weathervane can be as simple or complex as you want to make it. The tool provides a way to generate a predictable load to help you gain some experience with deploying a multi-tier application, benchmarking the application, and monitoring performance in a virtualized environment.

Weathervane includes an Auction application made up of different services: workload driver (simulates users accessing the application), web services, database services, application services, etc. All services can be run from a single VM or can be provided across several VMs. This allows for things to be configured more like a “real world” environment and to spread load across multiple guests which can be spread across multiple hosts in a cluster. Here is the logical layout of how I have Weathervane deployed in my home lab:

The Weathervane user guide walks through setting up a deployment in excellent detail. Here is a high level summary of the steps I followed to get Weathervane up and running in my home lab:

I am running services across two ESXi hosts. I have DRS set to “Partially Automated” and I have manually separate workloads (for example AuctionApp1 runs on labesx1, AuctionApp2 runs on labesx2). I created a Weathervane vApp mostly for organization but also so I can export or clone the whole thing. 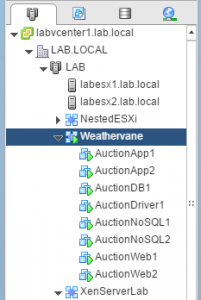 When you run Weathervane it will load the data required for the run and start the services on the VMs configured via DNS. 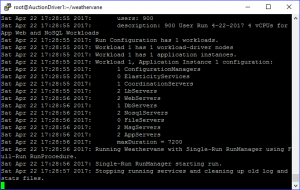 While Weathervane is running you can interact with the application. Just point you browser at the IP of one of the configured load balancers and log in using the username guest@foobar.xyz with the password guest. You will be able view auctions and place bids. 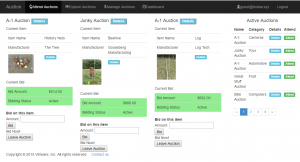 Once the run is complete the services are stopped, things are cleaned up, and the run is analyzed for pass/fail. 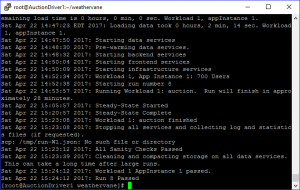 If you monitor the performance in the environment you will notice some patterns. The two red arrows in the performance chart from the AuctionDriver1 server point out the start of two different runs.

If we look at the memory charts for the Auction App Servers during the run. You can clearly see the memory consumption change through the start up, steady state, shutdown, and cleanup.

Notice how the memory consumption in the second App Server is nearly identical.

Same with CPU for the two Auction NoSQL Servers. You can see where the run started, where it reached steady state, and where it ended.

Notice how the load is very similar across both the NoSQL Servers.

Pretty much the same thing for the CPU of the Auction Web Servers. Both servers run through the start up, steady state, application shutdown, and clean up.

The impact of the load on the CPU across both Web Servers is nearly identical.

Great lab project! There are a number of other things you can do for testing and familiarization in your lab environment. Here are just a few thoughts:

There is a ton of other stuff you could experiment with. If you are looking for something to do with you lab… try Weathervane out.