Recently a fellow SA, @agoelammohamed, had a customer who deployed a new production SimpliVity cluster and was planning to decommission and re-purpose the original SimpliVity cluster. Migrating the VMs from the original cluster to the new cluster was easy enough, but they also needed to move around 700 SimpliVity backups, which need to be kept through the configured retention periods, to the new cluster. This can be done from the vSphere Web Client, but @agoelammohamed was looking to see if there was an easy way to automate this process. There is! The SimpliVity REST API includes an operation to copy backups from one OmniStack Cluster to another.

There are a couple other situations where this may come in handy, @agoelammohamed‘s is one and another could be that customer originally deployed SimpliVity for production and later added a DR site and wants to get the existing backups to the DR site.

There are a few variables which need to be configured in the script:

For each backup the SimpliVity REST API is used to:

Here is an example of the output from the script: 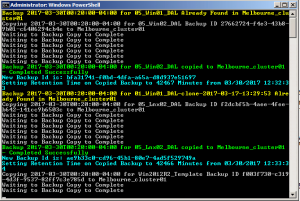 It could easily be modified to copy just the backups for a single VM. I will probably create a separate script for that as I have also received some request for that.

Hope you find this helpful. Comments or feedback always appreciated.