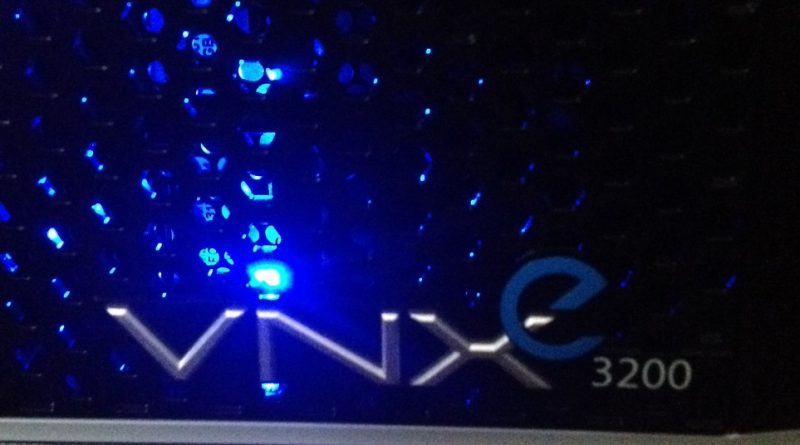 Last week I installed a new EMC VNXe3200 for a customer. This was my first installation of the VNXe3200 for production use and the first time I had configured a VNXe for Fiber Channel connectivity. Things went without a hitch. The VNXe3200 is just as easy to setup and configure as the other models in the VNXe line-up but it is packed with a ton of really nice features.

In this implementation the VNXe3200 is connected 8Gb Fiber Channel directly to the Cisco 6248 Fabric Interconnects. There is no Fiber Channel switching outside of the FIs, so the FIs were configured in Fiber Channel Switching mode. A mix of SAS, NL-SAS, and SSDs drives are installed in the VNXe. The SSDs have been configured for FAST Cache and Performance and Capacity Pools were created with the SAS and NL-SAS drives with FAST Cache enabled on these pools. Storage is presented to a number of B200 M3 blades… but that is not the cool part.

Part of the project was to migrate VMs off an existing Dell Equalogic SAN. This migration needed to be accomplished with minimal downtime. This is where things got kind of cool. I wanted to be able to enable the migrations with minimal modifications to the design of the new environment (less to clean up afterwards). The VNXe3200 allows you to present LUNs to both Fiber Channel and iSCSI connected hosts – at the same time. I created a LUN and presented it to the new UCS B-Series hosts via Fiber Channel and the the legacy Dell hosts via iSCSI.

The VNXe was connected to the existing iSCSI network and the iSCSI Targets on the VNXe were then configured on the legacy ESXi hosts. After a storage re-scan the VMFS datastores which had been configured on the new UCS ESXi hosts were now accessible from the legacy hosts. From there we just used Storage vMotion to move the VMs from the datastores on the Equalogic to the new datastores on the VNXe3200.

Once all the VMs had been Storage vMotioned to the new datastores, each VM was shutdown, moved into the new cluster of UCS ESXi hosts, and powered back on. We could have done this live if we had added the new hosts to the same cluster as the legacy hosts but since the processors in the new hosts were a much newer model we set a higher EVC Mode on the new Cluster. The downtime was less than a couple of minutes per VM.

Afterwards just unmount the datastores from the hosts in the legacy cluster, detach the device from the iSCSI storage adapter, remove the iSCSI targets, re-scan, and then remove the host access for the iSCSI connected hosts. No changes were necessary on the new UCS hosts.

One thought on “VNXe3200 – First Customer Install – FC and iSCSI access to the same LUN.”