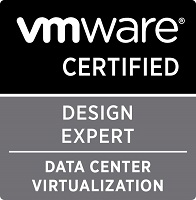 On Monday, February 10, 2014 at 2:00 PM I defended the design I submitted before a panel of VCDXs. Just a few short (short in days, but the wait was in no way short) days later on Thursday, February 13, 2014 I received the results of my defense:

The preparation and the defense process were time consuming, very stressful, extremely educational, and ultimately enjoyable experiences. I learned a tremendous amount about my abilities as an Architect/Engineer and about the VMware design process.

When I was managing an IT department I had a mentor who would often say “there is value in the process.” I feel this is definitely true of the VCDX certification process. The process of documenting, submitting, and defending the design was an extremely valuable learning experience.

My Journey
Up until the VCDX defense the VCAP-DCA is one of the best certification exams I have ever taken. I took the DCA on both vSphere 4 and vSphere 5 when I was working for a VMware customer. In late 2012 I joined a VMware Partner, ABS Technology Architects, and the completion of the VCAP-DCD was on my professional development road map. A short time after joining ABS I sat and passed the VCAP5-DCD. I thought that was as far as I wanted to take it.

Not sure why I decided that I wanted to pursue the VCDX. I was just thinking I had already invested a huge amount in learning the different VMware Technologies. I guess I just wanted to get some validation of the path I had chosen. I attended the VCDX Boot Camp at PEX in 2013 and thought “yeah I can do this.” Beyond that I also recognized how working through the VCDX certification process would ultimately make me a better Architect. I set a goal for myself to attempt the VCDX defense at PEX 2014.

So I started looking for a design. This was probably the hardest part. I wanted the design to be real and I wanted it to be interesting.

I had only been with ABS a few months and had only done a handful of small implementations. Mostly 3-4 hosts clusters for small customers. These were all fairly simple and pretty straight forward. Good stuff but nothing to really get excited about.

In October of 2013 I had the chance to create a design for an Emergency (911) Call Center located in Harrisonburg, VA. This was a small design (5 hosts, about 50 VMs) but as I worked on designing the solution I thought this was very interesting, especially the availability and manageability requirements. I really enjoyed working with the customer, learning about their processes, developing the design, and implementing the solution. The implementation would be finished before the end of the year. Not only was I the Lead Architect for the design but I would also be the Implementation Engineer.

Even though the timing was tight to get the design submitted for a potential PEX 2014 defense I decided to use this solution for my submission. The solution was not an overly complex solution nor was it a very large solution. The reason I chose it was that it seemed to hit all the requirements of the VCDX Blue Print. The primary requirements of the design were focused on availability, manageability, and security.

Submitting the Design
So far the most common question I have had since successfully defending has been “How long did it take you to prepare?”

I submitted my design documentation and application on December 19, 2013. I found out on January 10, 2014 that my design had been accepted for defense.

Defense Preparation
The rest of the time was spent preparing for the defense, studying my design, questioning my decisions, and participating in mocks. This time is more of a guess as I did not document the amount of time I spent here.

I did Mock Defenses every Friday from the time I submitted up until I left for my defense. The Mocks were with ABS management and other ABS engineers. These mocks were “friendly” mocks, I knew and regularly worked with the folks that participated. Network engineers, storage engineers, BC/DR engineers, and data center engineers all participated in these mocks. Even though these mocks were “friendly” they were still a huge benefit. They helped me build confidence in my presentation and my design. These mocks also focused on the design at a high level which helped me validate the design factors.

The only “unfriendly” mock I did was the day before my defense. “Unfriendly” should not be taken negatively here, I wish I had participated in more of these earlier in the preparation process. This single mock was extremely valuable. I ended up doing some last minute tweaks to my presentation based on things that were brought up in this mock. It was only an hour, but I am not sure I would have been successful with out having gone through this.

VCDX Prep and Defense Tips
Here are a few of my tips for preparing for the VCDX defense:

Thanks
A lot of time was put into preparing and ultimately achieving the VCDX certifications and I could not have done it alone. I think it is important to recognize the people that helped me through the process.

Thanks to Brad Christian for setting up the mock defenses and allowing me to participate. Also a big thanks to the other VCDX candidates that participated and ripped my design to shreds the day before my defense. Knocked me down a level, for sure, but this did better prepare me for my defense. I really think this final mock is what helped me the most.

A huge thanks to Mark Gabryjelski and Tim Antonowicz for their support, encouragement, and guidance.

Finally, a special thanks to my family (especially my wife Sandy and my kids Mary Shannon and Johnathan) for putting up with the time and expense it took. A lot of early weekend mornings were spent working on the design and preparing for the defense, a lot of things were missed or put off because of this. You guys are (and always have been) my everything. Thank you so much for everything you do and put up with. I love you guys.

#128
The weekend after I returned from SFO I was not sure what to do with myself. For the past 3 months or so I had spent most of my Saturday and Sunday mornings studying my design and preparing for my defense. I suddenly had a lot of available free time. A tweet from @millardjk had me doing some research (and doodling) on the #128.

Now to figure out what’s next…..