We had a storm and it took out my home PC. Not sure what happened – lightning, thunder, power blinked, power went out for several hours, power came back on, and everything came back up but my PC. I swapped out the power supply with a spare I had, no luck. I spent a little time trying to figure out what the issue was but I have had the PC for a good while, so I decided now was as good as anytime to replace it.

Since I had to pull it out anyway I also decided now would also a good time to rework and spruce up my home office area a bit. My home office is in our room over the garage and the my home lab is set up in the closet in same room. I cleaned up and organized the home lab closet awhile back.

This area has been my office area since we moved into the house back in 2003. My desk was a built in, I built it using a cheap door and I had some cabinets which I had also built out of MDF. There was nothing really wrong with the set up, I was just ready for a change so I ripped out the built in desk and all the cabinets. During this process I also purged a bunch of old stuff (cables, old hard drives, other misc crap) most of which has been collecting dust for years, but I am sure there is something I threw out which I will probably be looking for the day after trash day.

I didn’t take a proper before picture, but here’s a picture after the demo and purge. 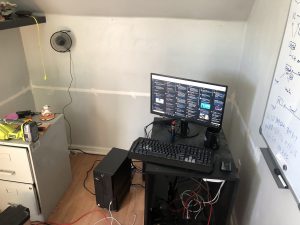 This time I opted for a desk. Did a bit of searching on Amazon, found and ordered this one.

The desk arrived well packaged, was easy to assemble, and looks nice. Fits perfect in the space and I can move it if I decide I want to face a different direction. Probably won’t, I mean I faced the back wall for over 15 years, but it is always good to have options.

Part way there… the desk is assembled. Have what I need up and running for work. I will need to move my whiteboard and I am going to add a shelf to the back wall. 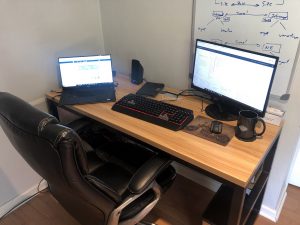 It’s a nice change. Wonder how long I can keep it uncluttered… probably not long. 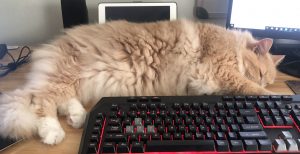 See told you it wouldn’t take long. Mr. Fluffy seems to have made himself at home.

What about the new PC? I mean that is what started me down this path in the first place…

I bought the same, but somewhat updated, model PC I had before, an Acer Aspire. The last time I purchased a home PC I literally went to Best Buy and bought the cheapest Windows PC they had in stock. I checked Best Buy and I couldn’t find it, so I checked Amazon, bingo! Price was right and free next day prime delivery, bonus!

The Acer Aspire does everything I need it to do – wasting time (I mean researching) on the Internet, office doc stuff for work, email, blogging, and the occasional Diablo hack and slash session.

I was pleasantly surprised at the lack of pre-installed junk on the PC. Took maybe 15 minutes to get Windows setup and remove the one or two things I didn’t need/want. Then I installed the stuff I regularly use:

iTunes was the most difficult thing to set up. My Music library is still a bit disorganized but I got over messing with it. All my iDevices sync and I have tunes, so I will clean it up later… or not.

Still have a bit of work to do, but it is coming along and I like the new set up so far. I repaired the walls from ripping out the built-ins, one day it will get a fresh coat of paint, one day.