Here is an example of the real-time chart in the vSphere Web Client which shows the read/write requests per second, and the read/write latency for a single virtual disks: 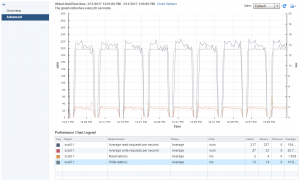 I adjusted the virtual disk chart options selecting counters for NumberReadAveraged, NumberWriteAverage, TotalReadLatency, and TotalWriteLatency for virtual disk scsi0:1 on LABFILE01. If the the default statistics level has not been changed these counters are only available real-time and are only kept for the past hour.

In the real-time stats the NumberReadAverage and the NumberWriteAverage are the average of the Read/Write commands (IOPS) issued per second to the virtual disk during the collection interval (20 second sample). Here are the details on the available virtual disk counters.

The script, collect-iops.ps1, collects the same 20 second real-time samples for NumberReadAveraged, NumberWriteAverage, TotalReadLatency, and TotalWriteLatency for each virtual machine disk. I had a script running in LABFILE01 reading and writing to virtual disk scsi0:1.

Each real-time interval collected from Get-Stat is written to a csv file ($file). Each line in the file contains the following information: TimeStamp (the interval’s timestamp), VM (the name of the VM), Disk (the VM’s virtual disk), Datastore (the datastore the virtual disk is stored on), ReadIOPS (the NumberReadAveraged value), ReadLatency (the TotalReadLatency in ms), WriteIOPS (the NumberWriteAveraged value), and WriteLatency (the TotalWriteLatency in ms).

Once you have collected all the samples you will have all the data you need to view information for VMs, datastores, or virtual disks. Here are a couple of powershell examples for pulling the data out of the csv:

If you are handy with Microsoft Excel, you can import the data from the csv and create graphs. I am not handy with Excel but I was able to generate a nice graph of the Total Average Read/Write (stacked) IOPS across all virtual disks for a full day (24 hours):

I will probably make a few changes to the script to take the vCenter Server, output file, and number of samples as parameters instead of as variable in the script but for now it does what I need it to do.

Have to give a quick shout out to the VMware vSphere PowerCLI Reference 2nd Edition.

It has a lot of great examples of working with statistics in PowerCLI.